What time is your Direct Teach? 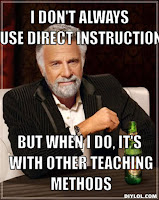 Is this question valid anymore?  In an old Marilyn Burns lesson format, direct teach is something that occurs regularly.  Our focus has shifted from teaching to learning.  Classrooms are no longer based on what we try to teach children.  Instead, classrooms are focused on ensuring that kids learn what they need to learn.

If we know what kids need to learn, and we know how to determine if every kid has learned exactly what he/she needed to learn, then Direct Teach is simply one strategy that may help kids learn.  Some of the best lessons I have seen did not include any Direct Teach.  They included great questions to drive exploration and connected problems that engaged students.  They may have included some small group guided learning.  They were usually collaborative in nature and well-designed.

A million thanks go to Marilyn Burns for providing me with a structured approach to high-quality teaching!  A million more thanks go to the countless teachers who showed me that high-quality learning doesn't mean Direct Teach!
Posted by Glennwilly at 12:16 PM No comments:

I can't. It would set a precedent.

And oftentimes we think, "This is not how we typically operate.  Will this change set a precedent?"

The answer to that last question scares us!  Even folks who say they love change and they fail forward frequently are scared of setting a precedent that they may need to repeat.  There is fear that any decision immediately becomes a new norm and everyone will expect it!

New norms and practices are tough!  It is also tough to tell the people directly affected that you can't honor the request because of reasons.  I think it is funny when a request is denied with communicated reasons that don't make sense!

"I'm sorry we can't go with your idea because it might upset the balance of kids moving through hallways at certain points during the day and other might think that this is now the right way and it would confuse everyone and blah blah blah!!!!"

It might be easier to say no to one person than to explain your decision to everyone that notices the exception you granted.

Posted by Glennwilly at 8:40 AM No comments: 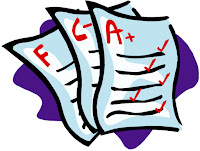 As I watch my own kids go through the cycle of a six-week grading period, I notice a definite pattern in their grades.

The first few weeks typically show wildly different grades because only a few are taken.  Then around the middle of the grading period, the normal grades begin to appear.  Around the fifth week out of six, the "important" grades hit the grade books and grades are lower than hoped for.  As the end of the grading period quickly approaches, parents worry, kids panic, and teachers work to help kids pass.

Then the last grades are entered and lots of folks go from panicked to relieved!

This pattern of grades seems to be quite repetitive.  I would bet a dollar that the lowest overall grade average in any high school course happens approximately one week before the end of the grading period.  I'd bet another dollar that the highest overall grade average happens at the end of the grading period!

Extra work is definitely done, and kids probably do all sorts of things to "repair" their grades, but is there really a magical change in mastery of the curriculum that happens during that last week?  Or, perhaps as a dedicated and passionate group of educators, we can find ways to ensure that the activities our students do each day are truly about the learning and not about the grade!
Posted by Glennwilly at 8:50 AM No comments:

A few years ago, my oldest son wanted to give band a try.  I was excited for several reasons.  Band kids usually become a tight-knit group.  I loved that he would become musical.  And, band usually has the highest average GPA of any student group!

He went to instrument tryouts and rated equally well for the trumpet and for percussion.  He couldn't decide which way to lean, so I asked the band director.  She had a great answer!  She said that trumpet players typically have a little more boisterous attitude while percussion players are oftentimes a bit more introverted.  My incredible kid was drummer!

We bought the instruments he needed ($1500) and he began his journey.  He practiced every day.  He logged his practice time and worked hard to do things well.  When it came time for his first chair test, he came home and sullenly told us that he was eighth chair.  Out of eight.

We encouraged him to continue and told him that many of his fellow percussionists played piano as well so they had a head start.  He was still trying to enjoy band.  The next week, still eighth chair.

As the weeks went on, he was consistently last.  One week, he walked in the door and exclaimed, "Seventh chair!  I'm not last!"  Hurray!  His perseverance was paying off!  Then he told us that one kid didn't have his band supplies that day so he automatically got eighth chair.

Enjoyment slowly drained from my kid's band experience.  I don't put all the blame on the chair test, but most assuredly, his consistent spot in last chair was a big factor.

I asked the band director about the whole chair test thing.  What was the purpose?  Were there any improved methods used in the middle school band community.  She replied, "Band has always done it that way.  It motivates kids to want to do better."

I told her that consistently coming in last place can certainly motivate someone.  Just not always to get better.  A lot of consistent last-placers are motivated to quit.  My son worked hard!  He tried!  He wanted to be a musician like his older cousin!

She didn't seem open to suggestion, but I made one anyways.  I asked her to consider having chair places #1 through #4.  Then everyone else is called 2nd row.  She scoffed at the idea.

My kid quit band after 24 weeks.  He was motivated alright.
Posted by Glennwilly at 7:36 AM No comments:

The pebble in your shoe

How long will you walk with a tiny pebble in your shoe?  It is barely noticeable.  Really, you pay it no attention if something else is on your mind.  But still, when you notice that pebble, it bothers you. How long do you put up with it before you do something about it?

If you are on the move, with somewhere to be, that pebble might just stay in your shoe for awhile.  Because removing the annoyance would require stopping for a moment, removing your shoe, extracting the pebble, adjusting your sock, and putting your shoe back on.  Stopping your forward progress, even if it will ease your journey forward doesn't seem worth it.

With any pebble though, there comes a point when the annoyance outweighs the trouble of stopping.  So you stop, remove the pebble, and those first pebble-free steps are awesome!  Sometimes, you giggle at your self for putting up with the annoyance for so long!  The pebble is gone and progress resumes better than ever!

What about at school?  Are there some pebbles that annoy you just a little bit?  Perhaps a certain procedure that doesn't quite function smoothly.  Perhaps a part of your daily lessons that don't produce the engagement you hoped for.  Perhaps a part of your lesson-planning process that could definitely be better, if only you would stop and address the irritant.  Maybe you are not getting the results you hope for from your current math practices.  Maybe your writing instruction lack true authenticity and the kids don't see the purpose.  Teachers usually know of several things that could be better. 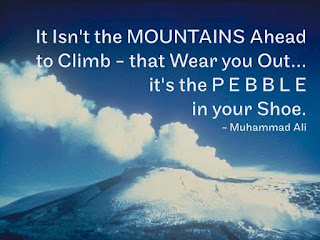 But school is almost always moving quickly.  There doesn't seem to be time to stop and take care of the problem.  Or maybe the solution isn't as easy simple as removing your shoe.  The solution may actually be unknown.  You know there is a better way, you just don't know what it is.  Or, you know you want something to be a little different, you just aren't sure the eventual improvement is worth the effort to make it happen.

It is worth it.  If it wasn't, we would all be walking around with pebbles in our shoes!

Posted by Glennwilly at 1:29 PM No comments: