The current unit for science includes a bunch of stuff about erosion and weathering and dirt.  The textbook talks about red soil in Hawaii and loamy soil and nutrient-rich soil and clay-rich soil.  Since a field trip to Hawaii is out of the question, the pictures and text in the book is somewhat irrelevant. 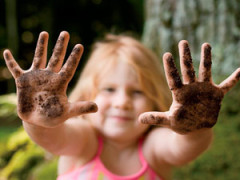 Instead, we went out side and looked for evidence of weathering and erosion.  We walked the places that water flowed and looked at the different dirt in different areas around campus.  We found places where fine particles of soil collected and we found areas with no fine soil, only rocks.  We noticed the direction the water erosion took place on the grounds of our school and checked out areas for deposition.  They felt the moisture-rich soil and shared the different soils in their hands.

And while all of this was happening, we used the appropriate vocabulary.  We noticed and wondered.  We found relevance in the ground beneath our feet.  We created connections between our world and the foreign language in that textbook.  After a great science walk, the kids mostly owned the vocabulary.  More importantly, they didn't memorize it.  They experienced it.
Posted by Glennwilly at 5:35 AM No comments:

As a principal, I would try my best to model and provide excellent PD.  In order to move our entire campus forward, I would labor and toil over PD design in order to make a big impact for all.  I would try to make it engaging for all by differentiating for differing levels of mastery.  My materials would be prepared ahead of time and I would have my questions ready to ask.  Musical interludes were common and there would always be plenty of movement and sharing.  I would be sure to highlight specific strategies and take-aways that could be used immediately in classrooms.  I also had two dynamic luxuries.  I did most of this planning with brilliant collaboration from my AP and my instructional coach.  Most importantly, I had tons of time to design and prep the PD.  It was not uncommon to spend three or four hours designing each hour of PD.  I believe my efforts to design and provide high-quality learning experiences for teachers were the most important hours of my time.

As a teacher, I try my best to provide excellent learning for my students.  In order to move my class forward, I invest brain-power and sweat to ensure that each student benefits from the learning activities.  I consider differentiation as much as possible and I hope to have material and questions prepped and ready for the day prior to the learning experience.  I have the luxury of planning time with a smart and complementary team of teachers.  I wish we could meet every day, but it isn't feasible...yet.  Without them, I wouldn't be able to leave campus before dark!  I believe every teacher's hardest work and most important work happens during the lesson design process.  With approximately 5.5 hours of classroom learning time each day, I estimate that I have about 15-20 minutes to plan each hour of learning.  This includes 45 minutes of time during my available conference times and 90-120 minutes before or after school each day.  These numbers are probably inflated due to all of the other time requirements that happen during a teacher's planning time.  Ten hour days are the short ones!

PD happens.  Great classroom strategies, models for instruction, and high-yield strategies are taught, practiced, and discussed.  As a principal, I wondered why these strategies didn't show up more ubiquitously in classrooms across campus.  Now... I get it.
Posted by Glennwilly at 7:28 AM No comments:

Close your eyes and create this picture in your mind:  Single file lines of folks walking through the hallways.  The lines stop at pre-determined locations.  They do not proceed without permission.  The only voices you hear are from those in charge, constantly reminding folks not to talk.  The only words you hear are, "Shhhh!"

"You have lost points."

"Stay on the right side."

Which one do you picture?

The only two places I can think of that require zero talking in the hallways are prisons and some elementary schools.  As I observe attempts for zero talking in schools, successfully getting kids to remain completely silent in hallways seems impossible.  As teachers attempt to make the hallways silent, the only words that are actually heard in the hallways are usually negative.  The only words that are heard are the ones that are spoken to kids who are breaking the rule.  When a kid wants to say something, a choice is made.  Am I gonna break the silence rule or not?  Usually, most kids choose option three.  Try to be sneaky.  Try not to get caught.

Sure, teachers will give compliments to a quiet class, but they do not actually seem to elicit any student pride.  They are fairly hollow compliments that are far outweighed by the constant "reminders" to be silent.  Six comments to students that are not quiet will be heard much more clearly than, "Thank you to the front of the line for not talking at all."  Usually, when a teacher thanks the front of the line, they really want the back of the line to hear it, hoping it will remind them to hush!

It is funny that when kids try to sneak in little conversations, they typically use a volume that teachers would find quite acceptable.  If we can see that most of our kids are capable of it, why don't we create systems that foster the skill?

Would more kids break the rules if we allowed quiet conversations?  I don't think so.  The same kids who act impulsively, regardless of the rules, will struggle.  I think that the average child will break the rules much less often because this system is not so black and white.  Option three, whispering, is actually the preferred option.  I am certain that teachers would minimize the number of redirection comments that currently occur entirely too often.

It also seems to be true that teachers vary widely on what silence means in the hallways.  Some teachers are absolute sticklers for it, while others are much more lax.  The sticklers shake their heads at the lax ones.  Funny though, that some teachers who don't like the rule still enforce it with fidelity because they are rule followers.

Does a demand for silence teach kids what we want them to learn about being a little human being in this world?
Posted by Glennwilly at 2:24 PM No comments:

I finally figured out why I am stuck.  Every day, I get stuck.  I am really struggling to get past the most simple parts of lesson planning for my class, designing engaging, high-quality learning activities for each content area.
Every day, I am opening my units of study and trying to decipher the actual pieces that need need to be taught and organize them into learning opportunities for students in a cohesive, linear manner.  I work to make these lessons fit into little bundles that fit into the master schedule.  I have about two hours for language arts, 90 minutes for math, 45 minutes for science, and 45 minutes for social studies.  These units of study are between 20 and 30 pages each and they are broken down into several, well-thought out sections designed to help me make sense of curricular expectations.

As a principal, I tried to slow teams down in order to focus conversations on DuFour's PLC questions.  That focus always started with question #1:  What do we need our students to learn?  And #2: How will we know if they have learned it?  The goal was to slow the conversation down and deeply discuss what each learning objective really meant, then design an assessment that checked their mastery at the agreed upon level of rigor.  Backwards design!

It is still clear to me that it is impossible to review every standard in every content area every week.  And I still need lesson plans.  And I am starting from scratch.

The last two weeks have gotten better and better.  My instructional coach rightly urged me to trust several of the planning pieces that were put in place by previous 4th grade teams.  This certainly made life easier.  I am getting unstuck.  My daily plans are getting done and the purpose for each learning activity is getting more clear.  I continue to insist that my students think, talk, and write throughout the day.  Busy work does not happen too often at all.

Getting unstuck will be a year-long process.  Getting better at the nuts and bolts of planning will take awhile.  Right now, I am still set on designing learning activities that are high quality.  I keep asking myself, "Can this be done in 50 hours a week or less?"  Then I laugh and laugh and laugh.
Posted by Glennwilly at 5:02 AM No comments: