Before whiteboards, classrooms had chalkboards and chalk.  The chalk in the erasers would build up and they would need to be cleaned out by banging the erasers together.  Kids in the class usually took care of this duty.  I banged erasers together a lot!  It took me awhile to realize that I was tricked! 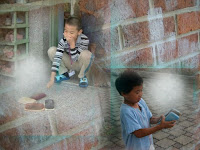 The exact same activity was a reward and a punishment.  My reaction to the activity differed though.  When it was a reward, I loved it!  The teacher chose me out of everyone in the whole class!  I didn't mind missing recess because I was a helper!  I was recognized for something good!  My teacher liked me!

When it was a punishment, I hated it.  I did not want to miss recess.  I wanted to play!  I could barely breathe from all the chalk dust.  Not fair!  Why me?  I wasn't the only one talking at the wrong time!  Banging erasers was cruel and unusual punishment.

When I talk to kids who have made a poor choice, I try to remember my erasers.  I ask myself, "What do I need this student to learn?" and, "How can I help them learn it?"

A group of students was running down the hall.  There were 10-12 of them.  The rest of the class was walking appropriately.  What did I want them to learn?  I wanted them to learn that a herd of kids running through the hall together is not safe.

How did I want them to learn it?

I could have given them the riot act.  I could have used my old-school principal voice (high volume and too many words.)  I could have marched them through the halls for 10 minutes and critiqued every step and misstep.  Not so good.

I looked at the situation from the opposite direction.  I asked myself, "What would I do to show off the excellent hallway walking skills of these kids?"  I would practice the skill, then trust them to do it well.

The answer became clear.  With ZERO sarcasm, I kindly asked them to practice walking in the hall for a little bit.  Probably 15 seconds.  Then I praised the action.  I got them out of their line and asked them to walk for a few more seconds.  Again, I praised their efforts and gave them a giant grin!  I asked them, "Check yourself...Who needed a quick reminder?"

Several hands went up.  Sometimes we all need a reminder.  I said, "Thanks for the quick practice session.  Head on back to your class.  I trust you."


Posted by Glennwilly at 1:53 PM No comments:

Some people are really well-conditioned to only act when told what to do.  They defer all decisions to their boss.  They may do what they are told quite well, but this group of people doesn't make the decisions.  They wait to be told what to do.

There seems to be a correlation between the folks who wait to be told what to do and the folks who complain about what they are told to do.  They are usually the same people!

Some folks are so busy forging on with great teaching and learning that they don't wait for much!  Ron Clark, National Teacher of the Year and founder of The Ron Clark Academy says that these folks are runners  and they are too busy running ahead doing things that are best for kids to wait to be told what to do.  And they are definitely too busy to complain about it!

Brene Brown, author of Daring Greatly, says that when we are willing to own our story, we can write our own ending.  Don't wait for someone to tell you what to do.  Don't let someone else write your story. Wake up each day and ask yourself, "How can I be better today than I was yesterday?"  Then go be better!
Posted by Glennwilly at 1:20 PM No comments: