I'd rather give a kid one chance too many rather than one too few.

There a comes a point in time when you have to decide that enough is enough.  You have given Little Glenn just about all the chances he could possibly need to make better choices.  Well he makes that same poor choice again and you are done!  Unless you are not done.

I don't know too many kids who wake up and say, "Today is the day I interrupt my teacher so much that she loses her cool and drags me to the office!"  I do know some kids that may seem to wake up that way though.  For the 88th day this year, Little Glenn has interrupted you incessantly.  He didn't wake up deciding to be the supreme interruptor, but he is wearing that cape anyways.  Does he get chance number 89?  Or was yesterday his last chance? 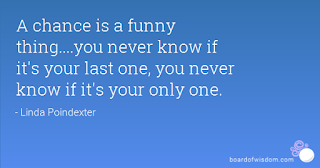