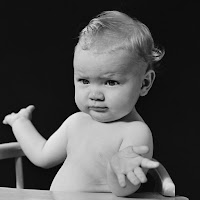 "Why were you out of your seat?"

"Why were you talking?"

"Why were you running down the hall?"

Kids say this quite often when they are questioned about misbehavior.  Some teachers believe that, "I don't know." is an unacceptable answer.  A kid makes a poor choice and the teacher wants to know why.  Asking a child to explain their rationale is not a bad thing.  Expecting a reasonable answer can be a bad thing.

A lot of kids would love to say, "Did you see me cut in and out of all those kids like I was in the NFL!!!"  They don't give you this answer because they know better.  A lot of kids just like to run but telling you that would not go so well for them.  Running is fun for some kids, but it is a bad answer for most teachers.

When kids respond with, "I don't know," they either really don't know or they really don't want to tell you because they know you won't like the answer.

Embrace and accept the I don't know, then explain your rationale for better behavior briefly and kindly.