Did you hear what I said?

This morning, I gave some very specific directions to a student.  I was quite sure she understood me.  There was no way she could have misunderstood me because my words were simple to comprehend and easy to do.

So she went to her next class and described her understanding of my words to her teacher.  And somehow, she got it wrong!  Well, I was CERTAIN that I described it perfectly!  Until she explained her understanding of my instructions to her teacher and it made perfect sense.  She thought she was being asked to leave directly at the end of the class and I thought she understood that she needed to leave at the beginning of the next class.  I don't remember the exact words, but both understandings were understandable!

So the teacher gave me an immediate example of a simple request that apparently wasn't so simple.  Her students were writing persuasively to convince the school not to require uniforms.  A student wrote some good stuff and the teacher wanted him to expand on the five W's and the H.  She asked what she thought was a simple question, "Who doesn't want to do what with the uniforms?" 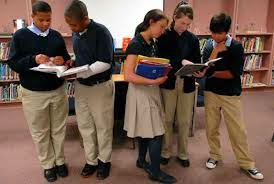 She tried again, "Who doesn't want to do what....with the uniforms?"

He could tell that the repeated question meant that she didn't think he understood it the first time, so he responded with a bit more question in his answer, "Where?"

The teacher, hearing that he was confused, asked a different way, "Not Where.  Who?"

He said, "Oooohhhh!!!  I thought you wanted to know what we didn't want to DO with the uniforms, so I said wear!"

It is all so easy to understand myself when I speak!